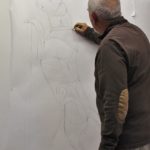 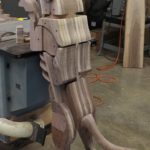 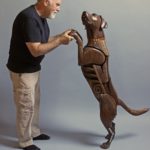 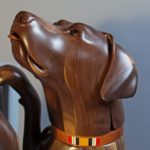 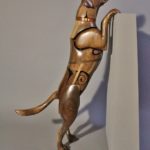 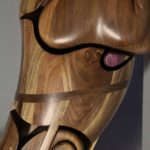 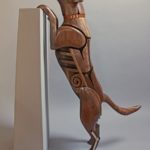 Wounded Warrior Dog IV
Sniffer, 2015
Laminated and carved walnut, copper, and nickel trim.
This explosives-detecting chocolate Labrador represents veterans wounded in Iraq and recalls the bomb-sniffing dog Cila M389, which was reunited with her handler, Jason Bos, in Grand Rapids, Michigan. While the real Cici—her nickname—was never harmed in battle, the injuries shown on this dog suggest a bomb blast, with one side of the dog left scarred, skeletal, and broken, with a metal brace on its left leg.