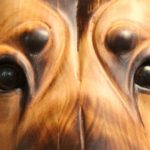 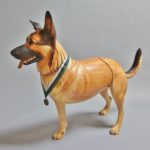 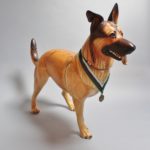 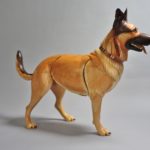 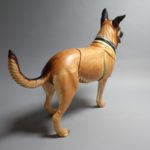 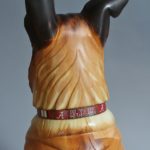 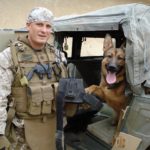 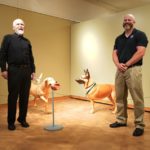 Trained to detect explosives for the Marine Corps, Lucca completed more than 400 missions over a 6-year career. In 2012 on patrol in Afghanistan, she barely survived an IED blast. Her handler, Cpl Juan Rodriguez, rushed to her aid and applied a tourniquet to her leg and never left her side as she healed. Surgeons amputated her injured leg, but she was up and walking in less than 2 weeks. After her convalescence, the retired Specialized Search Dog was adopted by her original handler, GySgt Christopher Willingham. She participated in visits to fellow amputees at military hospitals and stood in as a representative for human wounded vets in public programs. In 2016, she received the prestigious Dickin Medal for “conspicuous gallantry” by the People’s Dispensary for Sick Animals, a British organization.
In 2007, on their first tour in Iraq, Lucca and SSgt Willingham joined up with a yellow Labrador named Cooper and her handler, Army Cpl Kory Wiens of the 94th Mine Dog Detachment, 5th Engineer Batallion, 1st Engineer Brigade. Between patrols, Lucca and Cooper snoozed together in shady patches or cavorted with a deflated football that Wiens had brought from home. Cooper and Lucca’s friendship “traveled up the leash” to their handlers. Cooper and 20-year-old Cpl Wiens were on patrol on 6 July 2007 when an insurgent remotely detonated an IED hidden in a haystack, killing both instantly. They were the first handler-dog team killed during the War on Terror; their ashes were buried together.
As I worked on the sculpture honoring Cooper, I felt deep empathy for Cpl Wien’s father, Kevin. Each stroke, each sanding pass, and each joint connection contained a recognition of this father’s extreme loss and honored a son’s faithful service to his country, which inextricably connected to Cooper’s selfless sacrifice. With each step in my artistic process, I felt as if I was rebuilding their contributions to life and, perhaps in that way, redeeming all the goodness in Cooper and Kory that had been lost.
Lucca, with her one goofy floppy ear and her serious devotion to duty is gone now, too, having died of natural causes in 2018. Chris Willingham spoke for every handler when he told an Orange County Register reporter that no human and no machine devised could ever match the intelligence, devotion, and life-saving expertise that these dogs bring to their jobs. He said, “When you take a dog into combat deployment, you find the depth of the bond because your life is in in their abilities and their life is in your communication.”
I could not imagine a better way to represent this relationship than by putting form to the rapturous and gleeful moment when Cooper greets Lucca “across the rainbow bridge.” The dove on Cooper’s back signifies the angel wings he earned. The football is Cooper’s connection on Earth to Lucca. It celebrates the dogs’ playfulness and camaraderie, which brought joy to warfighters who existed in a pit of danger, facing peril every day.
James Mellick