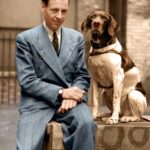 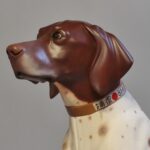 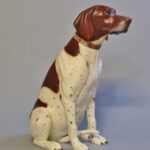 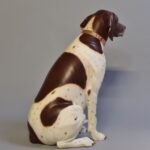 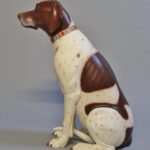 Judy POW 81-A is the 6th sculpture in the series of K9 War Stories that tell about the bond, survival and sacrifice of K9 teams in war.  This series is an outgrowth of the award winning allegory of the Wounded Warrior Dogs Project.  The liver and white English Pointer was a Royal Navy gunboat mascot that survived two torpedoes and spent the next three years as a Japanese Prisoner of War in the jungles of Sumatra.  The human prisoners saw her as a “guardian angel” as she saved several from drowning, sniffed out fresh spring water and brought them remains of snakes and vermin to eat.  Eventually Judy bonded with Frank Williams who gave her half of his ration of rice and she never left his side.  Judy was at risk of being discovered, killed and eaten by the camp guards so Frank was diligent to keep the dog hidden.

Judy had two litters of pups while she was in the prison camps.  From her first litter, Frank took a puppy to show the drunken Commandant of the prison and suggested giving the puppy to a local girl he was trying to impress.  In exchange Frank was able to get the Commandant to sign papers making Judy the only dog registered as a Prisoner of War.  This would save Judy from death and being eaten.  Frank’s prison number was “81” so Judy was given the number “81-A”

I created Judy POW 81-A to show the heroic will to survive in extreme adversity.  I’ve depicted Judy as pregnant with her first litter noting that this force of nature would save her life.